Member of Parliament for Carlisle

John organises and hosts an annual Carlisle Skills Fair. The event is a huge success attracting over 2500 jobseekers and young people and 80 businesses, organisations and training providers from the Carlisle constituency.

He has a keen interest in business, education and local government reform and was a member of the Communities and Local Government Select Committee during the last Parliament.

More information can be found on his website www.johnstevensonmp.co.uk 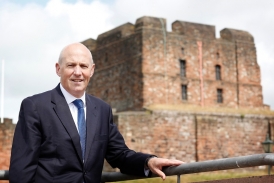 (If you email John, please include your name and postal address.)